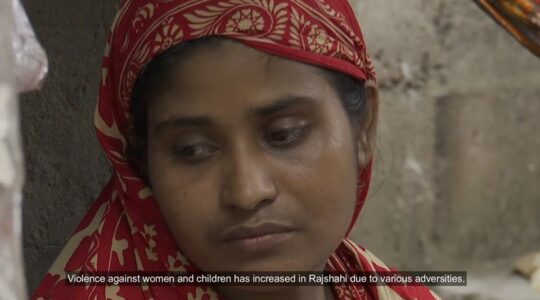 It’s midday. The rice has not been cooked yet for not being able to buy rice due to the financial crisis. Husband and wife have started a quarrel. At once it turns into domestic violence.

It is the common scenario of violence in most of the homes of marginalized people of Tultuli Para during the lockdown period.

Brother, look, there is no work outside. At that time, maybe some women have been oppressed by their husbands. Suppose, the husband comes home and there is no work. I’m borrowing from someone to arrange a daily meal. If you want money from him after his meal, then he has started beating me.

I have seen people walking around the area and found that there are always quarrels, fights, etc. According to the information of various organizations, life in Covid 19 Pandemic is going through various crises. People lost their employment. Due to earn a little income, domestic violence is happening frequently.

On the other hand, children and women are in a sense locked down at home. Children lost their opportunities for sports. All these created anxiety. Violence against women and children has increased in Rajshahi due to various adversities.

Due to the lockdown situation, people are hardly leaving their house. The bad people are trying to trap these children or women and to torture them.

Violence against children and women has increased. Family conflicts have increased as children have not been able to go out since they are at home. There is a growing disagreement between parents and some children which creates violent situations. As a result, children are being beaten a lot and become a victim of physical abuse. The conflict between parents has also increased because of decreased income. As a result of declining income, they are not able to meet their household expenses properly.

According to the Manusher Jonno Foundation, 4,249 women and 456 children were victims of domestic violence in the lockdown situation in Corona. In April, 35 children were raped in 7 districts of the country. At this time, it is a big concern that they are subject to domestic and sexual abuse at home and they have been considered the victim of this pandemic.

Domestic violence has been increased more than before. We saw a report from the Manusher Jonno Foundation in last April where there were more than four thousand (4249 women and children) are the victims of domestic violence and 56 of them were children. I don’t think there has been such a large number of surveys before this month.

The mighty Padma is just next to Rajshahi city. There are some river islands on the other side of Padma (Char) named Char Khidirpur, 10 No Char Majhardia, Shaheb-Nagar, etc. where child marriage has increased since the outbreak of coronavirus. At least ten child marriages have taken place in the Khidirpur area.

It was seen that both the party of boys and girl agreed to get them married but they are still underage to marry. This may be happening or is happening.

On July 25, the Daily Prothom Alo reported that 50 students of Chakrajapur High School in Kalin Bagha Upazila, which was closed due to a lockdown situation, got married.

Analysts say that violence against women has been seen over the centuries. But one of the reasons for the increased number of tortures during the pandemic is the frustration of most men after the economic crisis. And women and children are paying for this.

When a man staying at home, he is not in his job When he becomes jobless, it is difficult to control his temper.

In April, 4,249 women and 456 children were victims of domestic violence. Among them 85 victims were of sexual abuse, 14 were victims of rape, of which ten were reported during relief program.