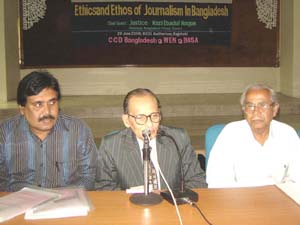 Chairman of Bangladesh Press Council Justice Kazi Ebadul Hoque said, freedom, accountability and transparency of press and media people have to be ensured for the welfare of the people and country. At the same time, all of us have to work together to establish rights and proper wages of journalists.

He said it while speaking as Chief Gust in a dialogue on “Ethics and Ethos of Journalism in Bangladesh” held at the conference hall of Rajshahi Chamber of Commerce and Industries on 26 June. Mass communication oriented knowledge centre CCD Bangladesh organized the dialogue. He also said, the past political governments did not work fairly at all by grossly approving their people of own choice for publishing newspapers, because most of those media houses have turned into only signboard-based institutions. These newspapers are torturing and exploiting journalists instead of providing them proper and regular financial facilities.

While speaking as Special Guest, Secretary of Bangladesh Press Council Shafiquzzaman said, due to the very logical reasons, it is impossible for all newspapers to immediately implement the latest wage board announced by the Government. But the Government, newspaper authority and journalist organizations have to take effective initiative, so that all newsmen are provided with actual salary and honorarium in accordance with the wage board in near future.

Presided over by Chairman of CCD Bangladesh noted journalist S M A Quader, the dialogue was addressed by editors of local newspapers and journalist leaders. They said, press council should be upgraded and modernized to establish rights and freedom of newspaper and newsmen. The council must reform as an effective institution by amending the Press Council Act, if needed. They called upon Government and Press Council authority to take necessary steps in this regard.