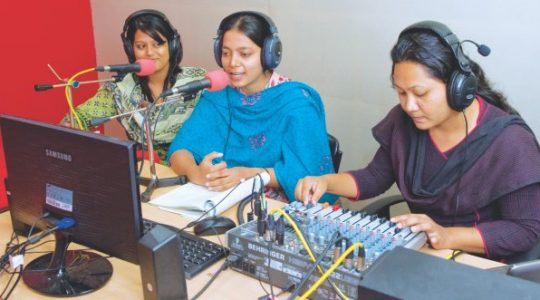 A research programme on necessity and urgency of community radio for the sake of welfare of the grass root and marginal people started in Rajshahi.

Mass communication oriented knowledge centre CCD Bangladesh and international media organization Panos Bangladesh is jointly conducting the research. Though campaign and advocacy programmes have been going on for long time to set up community radio in Bangladesh, truly no research on its necessity was conducted earlier in the country.

After expressing positive response from the present government for setting up community radio in the country, such a research appeared urgently needed here. As a result, CCD and Panos Bangladesh recently started the research on necessity and urgency of community radio for welfare of the grass root and marginal people. Assistant Professor of Mass Communication and Journalism Department of Rajshahi University Shatil Siraj has been conducting the research as Chief Researcher. A group of potential young researchers from Youth Leadership Programme of CCD are facilitating the work.

Meanwhile, two Focus Group Discussion (FGD)s have been held with the marginal people of the Char area and Bagmara Upazila in Rajshahi district under this programme. Women of different profession and age from Char area and men of different profession and age from Bagmara took part in the FGDs. Besides, 300 people from 16 remotest areas under 8 upazila in Rajshahi district have been interviewed through using questionnaire.