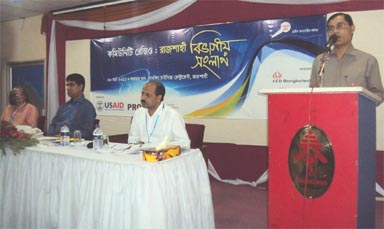 Community Radio could be able to play effective role in amplifying the voices of marginal and disadvantaged people and their information empowerment .At the same time it will play assertive role in making digital Bangladesh dream a reality. Speakers told in a divisional dialogue held in Rajshahi 0n 28 March. 2011

They also told that although govt.and NGOs implement different important programs for the socio-economic development of the poor and disadvantaged people those did not reach to the mass people due to having no information to their reach. Community Radio will have to play effective role to provide on-going facilities of govt. and NGOs at their doorsteps.

Speakers told in the dialogue that community radio should have to focus on indigenous knowledge and traditional practices.Besides, Community Radio should play role in good governance and accountability .Community Radio will play a significant role in disseminating the message of govt.’s charter of Change.

Additional Divisional Commissioner –Swpapn Kumar Roy attended as the chief guest in the dialogue jointly organized by Bangladesh NGOs Network for Radio and Communication and CCD with the support from USAID/Progati project District Commissioner Md.Delwar Bakht was the special guest in the workshop.

Among the participants of the dialogue, there were high officials of govt.and NGOs from Rajshahi, ChapaiNawabganj, Naogaon and Bogra district, the local elected representatives, agriculturist, teacher, journalist, adivashi and Community Radio initiators.

The participants discussed elaborately on the active role of community radio in socio-economic development of the marginalized people and the revival of indigenous culture. The CEO of BNNRC AHM Bazlur Rahman clarified different questions/queries from the participants.